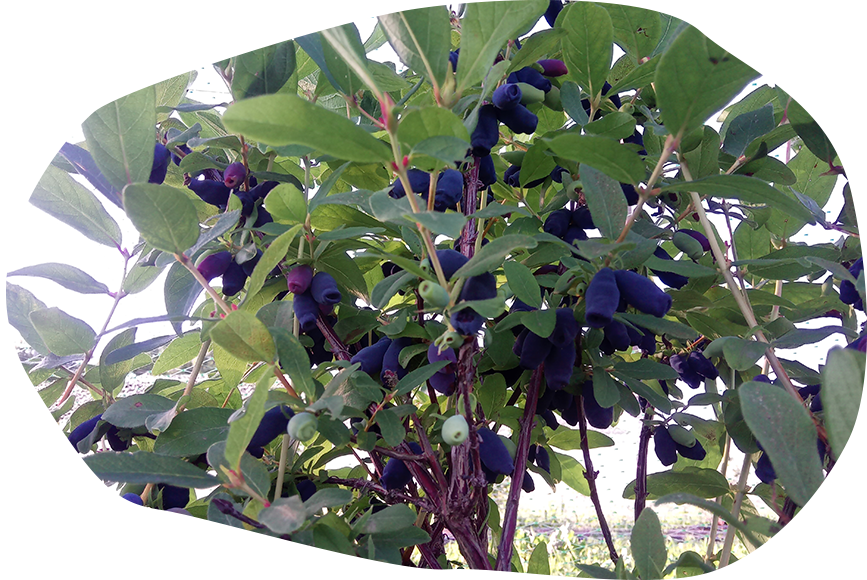 Haskap is the Japanese name for Lonicera caerulea, also known as edible Blue Honeysuckle. Haskap is an ancient Japanese name of the Ainu people of Northern Japan for the fruit meaning “berry of long life and good vision”“ハシカプ”. Haskap berries come from varieties common to a circumpolar species native to northern boreal forests in Asia, Europe, and North America. It is mainly found in low lying wet areas or high in mountains, in a variety of soil and growing conditions. The fruit from these varieties are generally smaller and tarter . It has been treasured and loved in Russia and Japan for centuries, for its very unique and sensuous taste and remarkable health properties, but almost unknown in Europe

Our Haskap berries come from new varieties bred by the Fruit Program at the University of Saskatchewan, Saskatoon, Saskatchewan, Canada.

The fruits of haskap berry honeysuckle are one of the earliest fruits  in the season, as they ripened  at May (earlier even than strawberries), up to 6 weeks before the Northern highbush blueberry.

The Haskap berry is dark blue in colour, naturally delicious and very good for you.  Their fruits are sweet, without the sour-and-bitter aftertaste.

They contain a lot of vitamins and minerals – which exceptionally favourably affect the human body – and boast great dietary, prophylactic and medicinal properties. Once experts called them “berries of eternal youth” since some antiageing compounds were discovered in them.

The new strains combine the most wanted features - large, dessert, sweet-and-sour fruits without the trace of gentian, resistance to drought, longevity, resistance to frost, and earliness. The unique healthiness of the cultivated strains enables using ecological methods of cultivation. The plant gives fruit every year and at the same time it is a long-lived plant and its production period comes to 20-30 years.